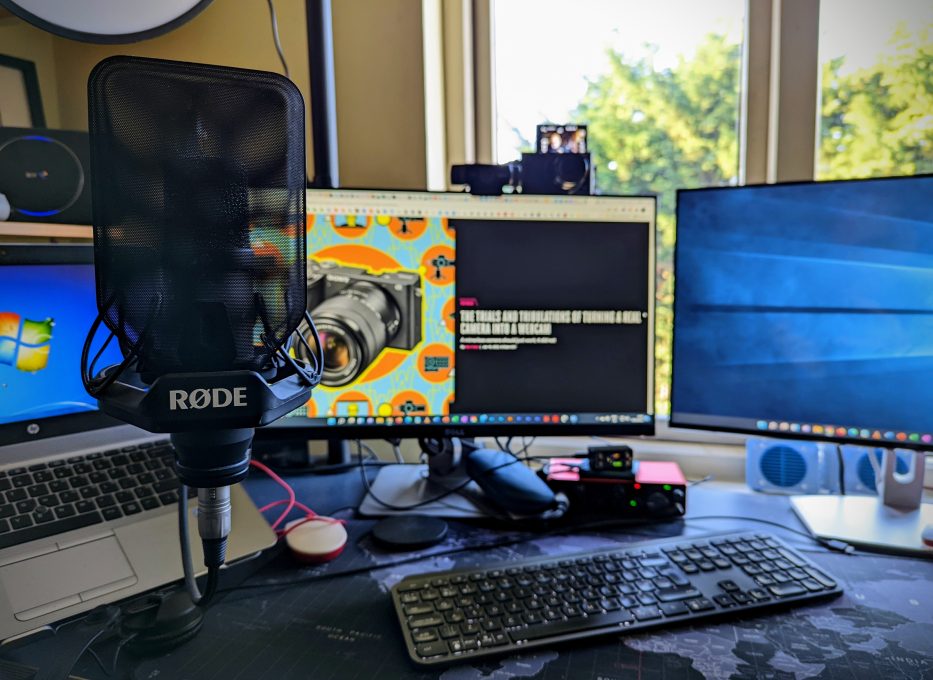 This piece by Alex Cranz at The Verge really struck a chord with me. In the piece Alex writes about her trials and tribulations with trying to use her nice Sony mirrorless camera as a webcam, and generally having a good Working From Home video set-up.

Fairly soon after lockdown started, I began to invest in my own set-up to improve things as much as I could. Not for me the rubbish built-in webcams and microphones in the corporate laptops. Oh no.

I’d wanted to treat myself to a decent microphone, so bought a Rode NT1 and one of their studio arms. I mounted that at the edge of my desk and it lets me pull the microphone close to mouth when I’m using it, and push it away when I’m not. The arm doesn’t get in the way of the camera either. I paired the microphone with a Focusrite Scarlett 2i2 audio interface. You can plug two studio mics into it, while it connects to your computer via USB. (To be clear, this is overkill. But I am very much set-up for making podcasts…)

I already had a pretty decent Logitech C922 camera, but like Alex, I had a mirrorless camera, and a Sony RX100 Mk III. Near the start of lockdown, webcams became like gold dust, and many camera manufacturers rushed out software to let you use their products as webcams. Sony was a bit laggardly with this, and when it finally arrived it was pretty sub-par.

The smart option was to ignore the software, and rely on the camera’s HDMI out. Then you could either buy a fancy streaming dongle from companies like Elgato who’s customer base is largely game-streamers, or, if you were in the know, buy a cheap no-brand Chinese dongle for a few quid on Amazon or eBay. I went down that route and it worked like a dream. I could use my RX100 with some nice focusing options that my Logitech could never manage (real soft-focus backgrounds using a fast lens, not Zoom’s slightly clunky software version).

Finally I added a light. Not a ring light which tend to evenly light your face from the front, but a flat LED panel that I attached to my desk with a bastardised cheap monitor stand so that it lights me from about 10pm on the clock face – coming down from my left.

This all worked great for a while until… something broke in software somewhere.

I couldn’t put my finger exactly on what it was that broke, but my suspicions based on deep searching of sub-reddits, is that Microsoft Teams may have done it.

Basically my cheap HDMI dongle was now “squashing” me. It was still a 16:9 image, but somehow squashed and nothing I could do in software like Zoom or Teams could un-squash me.

The only workaround I was able to achieve was by using OBS Studio. Passing the video through OBS sorted the camera issue out.

If you’ve not come across it, OBS Studio is a free open source package of software that helps you stream. It powers many of the Twitch and YouTube streamers you see online. They may be capturing themselves, their game stream, and perhaps offering multiple camera angles. OBS Studio lets you take these feeds, make a nice overall presentation of them, and then output that finished product to, say, Twitch. The streamer can “self-operate” it and cut between different cameras or different “scenes.” E.g. Switch between a shot that shows their game taking up most of the screen with them minimised in the corner, to a shot that shows just them full-sized.

I started to use this for remote presentations, since it’s far more flexible than just using “Share Screen” in Zoom. For example, I would design a PowerPoint presentation in such a way that I would appear in the left third of the screen, while the right two-thirds would have my slides’ contents. Basically, it’s the sort of thing we see everyday on news channels on TV. As long as my viewers watched in Speaker View in Zoom, they got a better experience.

Anyway, one of the clever things that OBS Studio has is that it creates its own virtual camera feed that you can then output to in the Settings of apps like Zoom.

And when my stretching started, I used this as a workaround to get things going again.

The only real issue with all of this is that you need a PC with a certain amount of oomph to run OBS Studio in the background without lag. Also, in practical terms, it meant a little bit more than just clicking on a link to Zoom. I had to fire up OBS Studio, turn on the virtual camera. Then in Zoom make sure the correct camera was used.

I ended up using my Logitech more frequently.

Finally today, I’ve tried something that I hadn’t before. I uninstalled Teams – I somehow had two separate versions on my PC. Then I reinstalled one version. (Sidenote: Microsoft, why are there two versions of Teams? A corporate one and a home one? I have both a personal 365 account and use MS Office via work. Which one should I be using?)

And it all seems to work. I made sure in Zoom that I checked “HD” and I am – for now – unstretched again.

Business Opportunity: Starting a company to help people in the public eye really improve their “WFH” game. By that I mean, get them to buy some basic kit that improves on the rubbish webcam in their laptop, gives them some lighting to stop them looking quite so grainy and provide a better view than up their nostrils.

Any politician worth their salt probably spends a reasonable sum on business attire to be worn in the Houses of Parliament, but probably baulks at spending a few hundred quid on their WFH set-up.

Companies like Logitech, Elgato and Anker and busily getting into this space with improved kit, but spending even a few more pounds could radically improve someone’s setup…